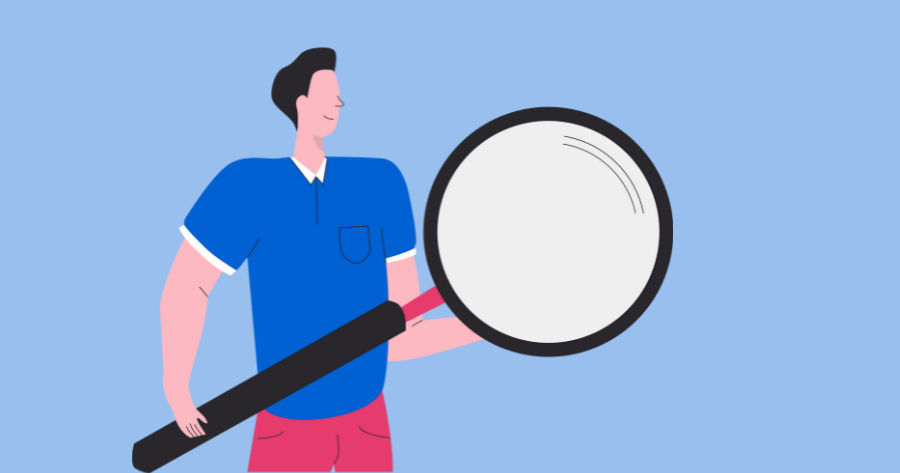 Fake news, fake photos, fake profiles - we can call the spreading of them our current-day plague. A plague that is very hard to recognize and defeat. As the amount of false information is growing, more and more people and organizations are trying to find a remedy for this overwhelming flood of falsehood. We would also like to contribute to this movement of uncovering the truth by giving you a few tips on how to recognize fake photos.

Since the technology of creating and modifying images has moved forward, we’re very often not able to catch fake photos just by examining them visually. With that in mind, we have searched the Internet for a tool that is 100% effective in recognizing fake photos. Unfortunately, we haven’t found one. The major weakness of popular fake image detectors is connected to the fact that they focus on spotting the modified areas of the photo. Therefore, they are not able to recognize photos that are fake, but unmodified (for example generated from some software). We have checked the abilities of the 2 most popular online fake image detectors using the graphics created for our article about how to spot fake dating profiles. This image contains photos of non-existing people created by AI and descriptions made by us that are pasted onto a screenshot of a real dating profile. As you can see, the tools we used (FotoForensics and Forensically) were able to recognize some modifications, but not all. 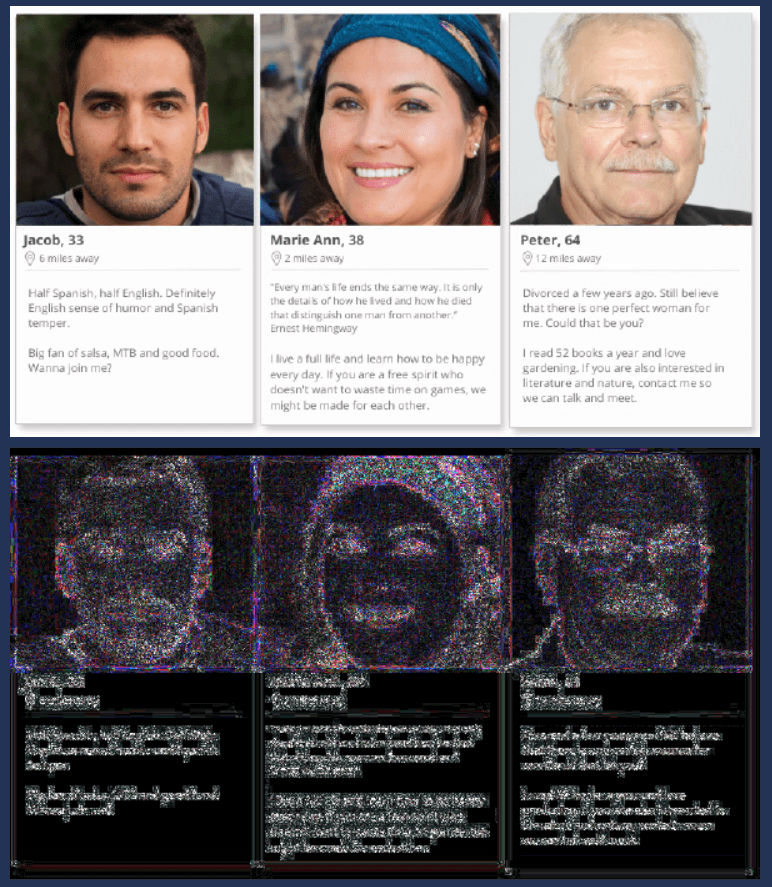 With Forensically, hovering above a fragment of a photo gives you such results: 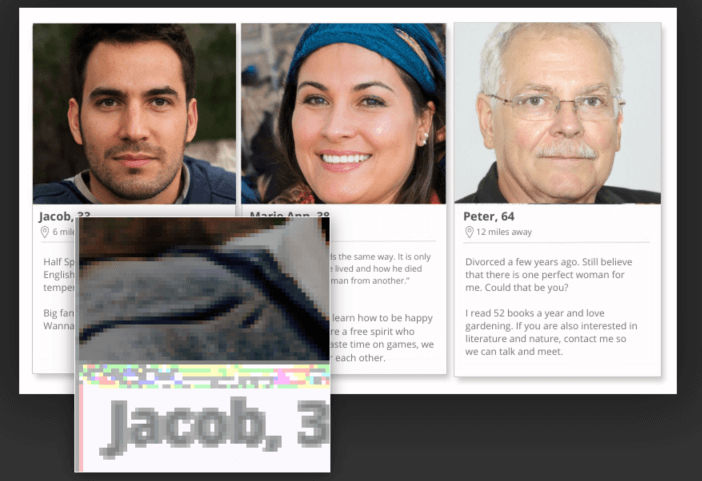 Explanation: in an original, non-modified image, neighboring pixels would have similar brightness, and similar textures would be colored in a similar way. This is based on Error Level Analysis which permits identifying areas within an image that are at different compression levels. To get a better understanding of how to interpret results, take a look at articles or FAQs published on FotoForensics or Forensically.

How to verify fake photos

Pick up on where the laws of physics have been broken

There are some changes to a photo that are more obvious to spot: rough edges within the image, unnatural shapes, objects cropped in a strange way, or shadows inconsistent with the angle of the light. If the image you’re examining is large enough, take a closer look into it by zooming into particular parts in order to check the subtle editions you might have otherwise missed.

Pay attention to the quality of an image

Some photoshoppers cover up the modifications done to an image by reducing the quality of the photo. This trick, however, is not effective because the modified parts of a photo can still be spotted: they will be of a lower quality than the rest of the image. To discover those changed areas you can use one of the afore-mentioned fake image detectors. 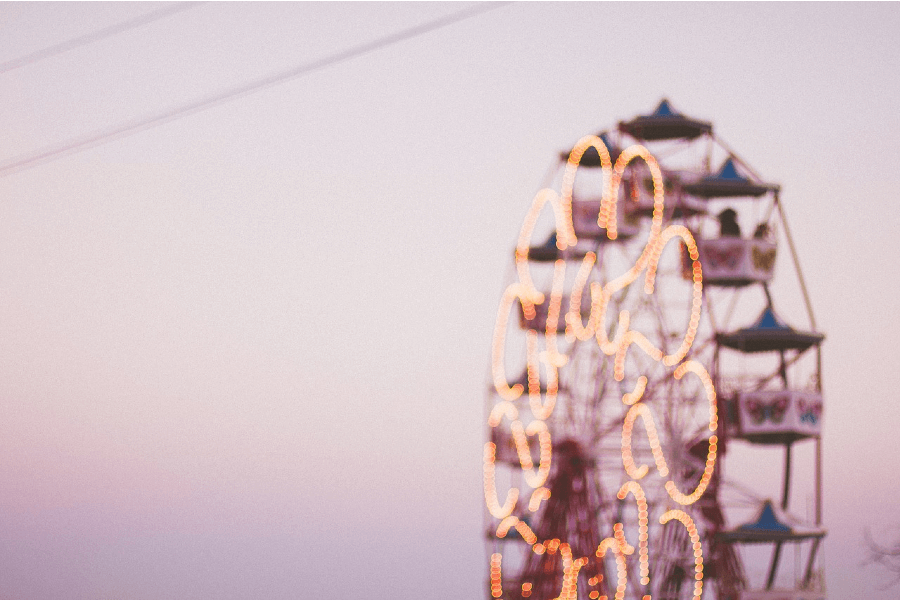 Use other people’s help by performing a reverse image search

A reverse image search engine is a tool that allows you to find where a particular image has previously been used online. It is possible that someone has already debunked this image and conducting just one reverse image search may dispel any doubts you might have that a given photo is fake. However, please consider that there is no simple rule that would indicate if finding an image or not meant it was real or fake. To perform a reverse image search you can use TinEye.

You can also use a secret weapon called EXIF data. This type of metadata contains deeper information about a photo, like where and how the image was taken and whether it has ever been opened or saved in Photoshop.

There are a lot of programs that allow you to read EXIF metadata, but in our opinion the best and most intuitive one is exifdata.com. However, you have to be aware that some online services strip out much of an image’s metadata, so the absence of it is not uncommon. 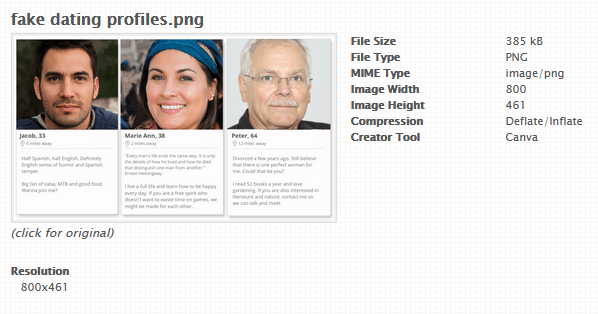 “Maybe she’s born with it. Maybe it’s Photoshop”. Who doesn’t know that slogan? And who hasn’t experienced how true it is? Nobody likes being fooled, so when we find out that an image is fake or touched up, we respond emotionally, usually with anger or disappointment. Unfortunately, letting our emotions blind us might be the worst possible policy.

The best way to deal with a fake profile is to play it cool. If you suspect that someone lied about their identity, first check them out using the methods and tools mentioned above and then confront them when you have verified information.

Be aware that your image can also be used to create a fake identity. We call that type of infringement catfishing. A catfish is a person who takes someone else’s data like their name, surname, email address, photo in order to create a profile on dating sites, social media, etc., and uses it to exploit other people emotionally and/or financially. You can read more about catfishing from articles on our blog: What is catfishing, You have been catfished, How to recognize a catfish, but first check out if your photos have been used to create a fake profile.

Photos published without consent: how to find them and remove them from the Internet?

Read our article to receive some tips regarding the removal of photos published without consent.

Photos published without consent: how to find them and remove them from the Internet? - Read more