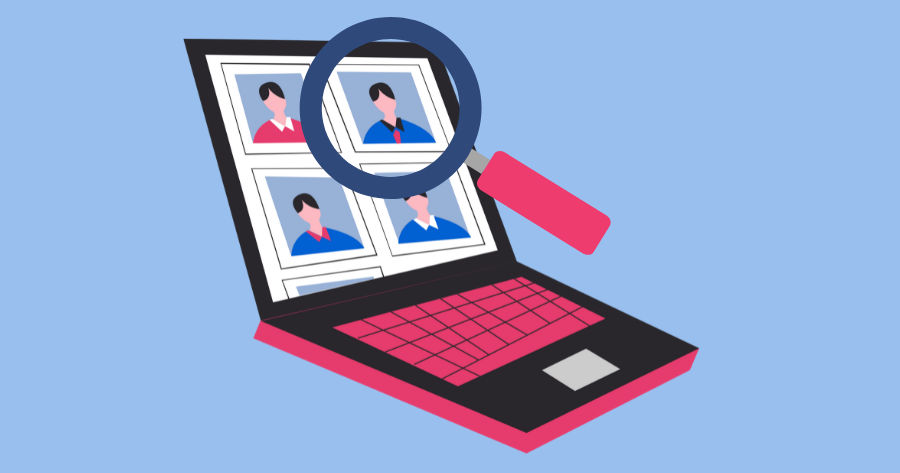 How to search for scammer pictures

Have you ever heard about a case where someone got scammed and thought “But it was totally obvious that it was a scam! How could they get fooled so easily?”. The truth is, that scammers have various ways of luring people in and exploiting them for their own personal gain. You truly have no way of knowing how it is, unless you actually end up falling victim to such a scam. In this article we will be explaining how you can search for scammer profile pictures and protect your personal image against scammers.

What are photos used for by scammers?

Since scammers can’t reveal their true identities to their victims, they steal other peoples photos and use them as their own so they can hide being a fake persona while commiting fraud. They will select pictures of good looking people since they want to appeal to a large number of potential victims. However, since they first and foremost wish to appear trustworthy, they will create a profile at a dating website (however that isn’t always the case), find a few people to talk to and proceed to build up a trusting relationship. They will create relatable stories based on what they know about the person they’re talking to and start from there. After they have gained the trust of their victims, they will start asking for money. At first the sums might be small, but with time, they will end up racking in quite a big amount of money. Scammers create fake stories in order to make their victims feel sorry for them and extort money out of them. There have even been cases where the perpetrator lied about the device (phone, laptop, etc) they were using in order to communicate with their victim abruptly breaking down so they can emotionally manipulate an innocent person into sending them money, since they wish to keep talking to them.

However, there are signs which can give out when someone is a scammer. One such profile may be managed by multiple people, so it can be easy to detect a scam, since their way of talking might change from time to time. They will also not have many pictures, since they steal them from other, existing people. Meeting up or video calling them is also out of the question, since they don’t want to compromise their true identity. A photo used by a scammer can also appear on multiple profiles at the same time, since such people tend to try and scam as many people as possible.

How to search for scammers pictures

If you believe you are being scammed, you can perform a photo scammer search by using a search engine such as Google Images. There are also communities which fight against such scammers by sharing information such as the photos and names that are used by them. Since after they get exposed they can create a new profile and continue scamming people, so spreading awareness is very important. There you can check photo for scammer use. However, if you’re worried that someone is using your photos to create fake profiles and scam others, an online facial recognition search engine is exactly what you need. By using PimEyes, you can monitor your online presence and make sure that your image isn’t being compromised.

If you think your pictures are being used by scammers, the best thing you can do is to seek legal help from the appropriate authorities. Collect as much information as you can without letting the perpetrator know and report everything to the police and the appropriate department which deals with such cases in your place of residency.

How do you protect yourself from identity theft?

Knowing and monitoring where your pictures appear on the internet is a very important part of protecting yourself from identity theft. Create profiles only on legit, popular and trustworthy sites and make sure not to spread your pictures around the web. Identity thieves can even steal your name and other sensitive information, so always be cautious about who you’re talking to online. Don’t share any information which such people could use and exploit against you.

The results of falling victim to scammers can truly be horrifying. Many people who thought they were living the best times of their lives since they were made to think they had found their significant other or had won a large sum of money were actually scammed for much more. Not only did they lose a lot of money, but their trust was also broken. If you or someone close to you have fallen victim to such a scam, don’t stay silent and take action against the perpetrator. However, you must always make sure that your identity isn’t being compromised and used by someone to fool others. Don’t let your personal image be exploited by scammers for such malicious reasons.

Scams are a very real, big problem nowadays. Knowing how to identify a scammer and protecting yourself from such people is very important. Always be aware of who you’re talking to and never send any money to people you’ve met on social media but not in real life. No matter how much you like someone, don’t compromise yourself by trying to help them out when you’re not sure that they’re actually the person they’re claiming to be. If you notice a sign which might give out the fact that they’re actually a scammer, try to alert other people and cut off all communication with that person. Protect yourself by using tools like PimEyes to see if your pictures aren’t being used by fraudsters.

Try performing a search to make sure your identity is safe

How to find my photos on the Internet?

Knowing where you appear on the Internet is vital when it comes to monitoring your online presence.

How to find my photos on the Internet? - Read more

The misuse of someone's pictures without their consent can really damage their reputation. Read more about what you can do if you find yourself in such a situation.

Has your picture been misused in an ad? - Read more

How do identity thieves work?

Knowing how identity thieves work and recognizing signs of identity theft is very important for our safety. In this blog we will be explaining how you can detect those things and protect yourself against them.